Go To The Shop To Buy Now! 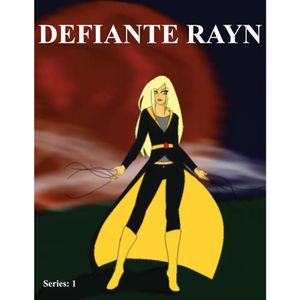 Defiant Rayn is from planet Kazi living on earth as therockstar The Dutchess. Defiante Rayn uses the music world to move around the globe to find the enemies to her and her fellow Kazainians the Eefizions
that have come to earth for only one reason....
Her demise.

Vital to Kazi's future Defiante Rayn must save herself by any means nesscessary and with that mindset she proceeds to not only rid earth of the enemies to her and her Kazainian counterparts, but to rid earth of it's own darkness and bring peace to both planets she calls home.

.......The Historian (Mr.Ontureus) was the overseer of the Kari-kai.
The Historian plans for every Tru-Lyte Illuminator energy birth on Kah-zai.
This particular birth of Defiante Rayn was no different until an unknown light source came flying towards Kah-zai.
....Then there was full on war.
The strange light source came from everywhere with a thunderous cry hitting the planet Kah-zai at all angles.
No one was prepared.....The devastation was almost immediate.
Could they know a Tru-Lyte Illuminator was being born?
How would they know about us?
Was this just coincidence?
This time.......This day.
Did someone sell out our planet......it's life source.........it's peace.
The Historian had to scramble to get to the energy birth.
Surely they couldn't be looking for Defiante. Already named after one of the first Tru-Lyte Illuminators ever killed by an enemy source. The

Historian, hoping they wouldn't regret giving her the name, raced even faster.
Defiante Rayn and every other Tru-Lyte Illuminator had the power to use energy in any form for anything. Since everything is energy and

energy is everything a Tru-Lyter’s power is infinite. It is infinite only if a Tru-Lyter is around or in possession of Persalla Stones.
Defiantes death would mean total darkness and defeat for Kah-zai. It could only survive if she lived. The Historian had to get to her.....

The Dutchess is a rock singer who blurred the lines of reality and fiction to create
the micro-novel comic Defiante Rayn.

The Dutchess, Writer and Creator

Helen was born in Walla Walla Washington and
currently resides in Las Vegas, Nevada. She
enjoys the finer things in life such as deadlines
and late nights. Often she can be found in front
of her computer, yelling at the paint tools to
" just cooperate for once ". On a good day she
can be found in Benicia California, sitting on the
pier and writing down that next great idea.